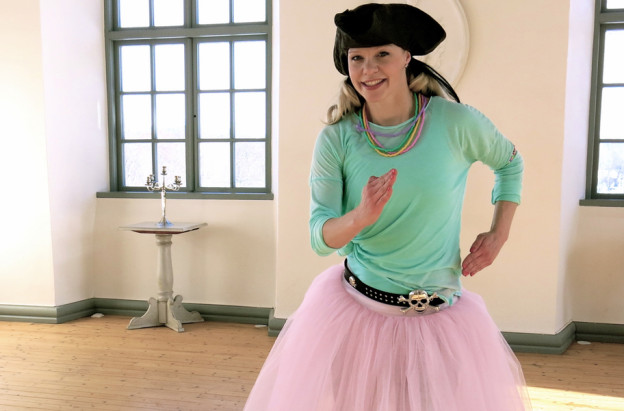 10 kids dance videos where you get to hang out with the Pirate Sessa in her mother’s castle – to dance and just have fun.

The dance moves are made for children around 2-7 years old, the dances are named after words that children recognize.

It’s easy to learn the dances

As an adult you can say the dance titles the first few times, ”this is the butterfly dance” for example.

Your child will soon know all the titles and will probably find some favorite dances, and they might vary over time.

The Pirate Sessa kids dance concept is made to do at home in the living room, at the birthday party or in pre-school.

The dances in ”Pirate Sessa in the Castle” are inspired by the butterfly, police car, robot, airplane, horse, tiger, frog, scissors and bear. Video and music for each track.

Dance number 10 is freeze dance, which is popular with many children, built-in pauses in the music makes it easy to do dance and freeze – again and again.

Description of the dances in the app Kids Dance with the Pirate Sessa in the Castle:

Driving the police car – with the big wheel and the small wheel. Chase the thief! Practice arm movements, rhythm and learning the difference in sizes large and small. Honk and drive!

Lift, air at full speed and land. Again and again! Learning and practising to move in a certain path (running in an eight pattern) (although it is perfectly OK to run anyhow) (over time the child will probably start running in an eight, but there is nothing you as a parent needs to push).

Gallop and trot like a horse – and you also get to do the fun horse clap play. The moves develop coordination arms and hands, increase rhythm and body control for the entire body. It is not important to move or clap the same beats or not even in the same order as Pirate Sessa in the video, a clap play is a clap play – always right and always fun!

Here comes the tiger! The tiger hunts and tiger is sneaking around here and there. Sneak and dance like a tiger, look as scary as you can! The moves develop child’s coordination skills and role play.

Dance and move as a frog and of course – jump like a frog! Natural movements that strengthens the body and improve body control.

10. Freeze Dance with the Pirate Sessa at the Castle

Want a sneak peek at the dances in the app?

Here you see 10 short parts of the app Kids Dance with the Pirate Sessa in the Castle:

Where you find this kids app?